Aside from the obvious, there have been a whole load of interesting (and perhaps concerning!) developments in the world of digital marketing. We’ve covered many of the most important updates in our monthly digital marketing roundups, but with 2020 nearly behind us it seems a good time to look back at the biggest stories of the past year!

Right from the off, Google made it clear that it was going to make serious updates to it’s behind-the-scenes algorithms. Back in Jan 2020, Google rolled out the first of more than 10 confirmed updates; the first of these had impacts across the SEO world, with Mordy Oberstein from RankRanger suggesting that this first update impacted what he called “Your Money, Your Life” signals – in other words, websites which weren’t able to make visitors feel safe about spending their money were most heavily impacted. 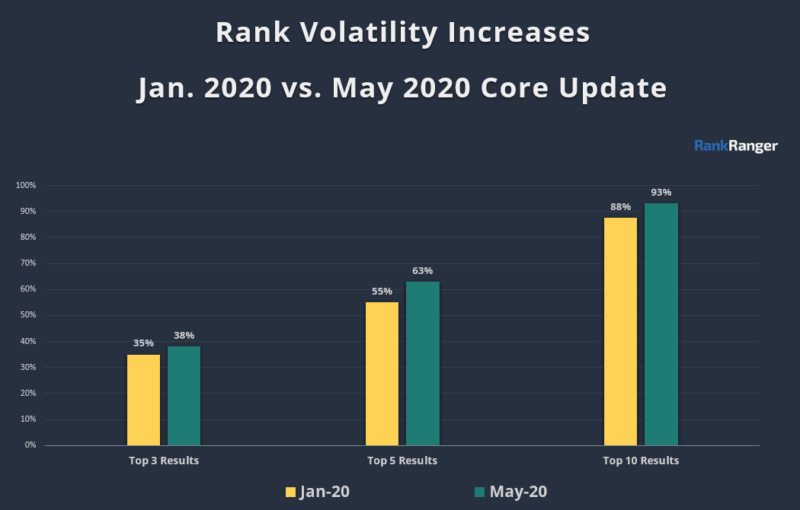 Next, May 2020 saw a huge core update – again, RankRanger called it an “absolute monster”, impacting almost all online sectors including Retail, Travel and Health. Reports at the time suggested that Google’s May 2020 update was a broad scope update, with no specific focus on what Google was trying to achieve with it’s algorithm changes, but evidence suggested that 93% off all Top 10 results were impacted in one way or another!

Finally, Google released it’s last core update of the year – another broad scope update, this was officially announced by Google on December 3rd: 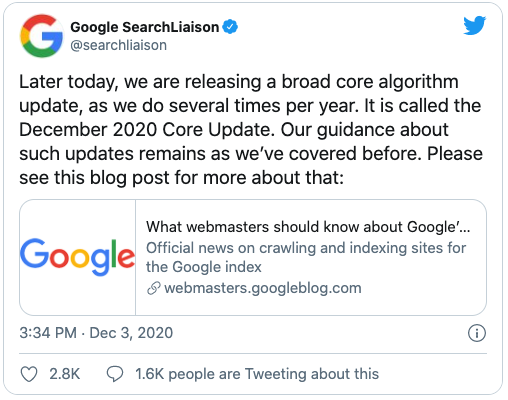 Investigation by industry leader SearchMetrocs showed clear shifts in rankings for areas related to E-A-T (Expertise-Authoritativeness-Trustworthiness) and quality unique content such music, health, finance, news, and ecommerce. Some individuals claimed to have lost over 40% of their Google organic traffic, while others did well from this update. Indeed, a number of Mackerel media’s own clients saw large improvements in Page ranking for key search terms.

With iOS 14 being released in September, all Apple devices & Safari browsers are now able to block all cookies from third-party websites, and prevent third-party advertisers from targeting you based on your browser history and online habits. Apple has argued that third-party cookies are mainly used for cross-site tracking and advertising purposes, but they also allow website owners to provide additional useful services – such as live chats or social media buttons.

We’ve already seen some interesting cookie workarounds coming from the tech giant in the past month, with its recently announced “Consent Mode” being far less reliant on the deployment of cookies for tracking.

The impact of this discovery is that data for Safari devices may not be as accurate as pre-ITP times. However, as with all data interpretation, digital marketers need to be aware of the bigger picture – how are the trends on other devices shifting, and what can we learn from the data that IS available to us?

In addition to this huge shake-up in cookie-tracking, rumours have persisted that Apple is preparing to launch its own Search Engine to rival Google – whom it currently receives a reported $12bn from to be the ‘default’ search engine for both Safari iOS and Siri searches.

In October, Google revealed a new version of Google Analytics. The exciting rollout completely changes how data is captured using “Streams”, tracked and integrated with other Google tools such as GTM or Search Console. As with all of Google’s current updates, Machine Learning & AI are at the heart of the new Google Analytics 4.0 – meaning that we might be able to expect even more exciting features in the future! 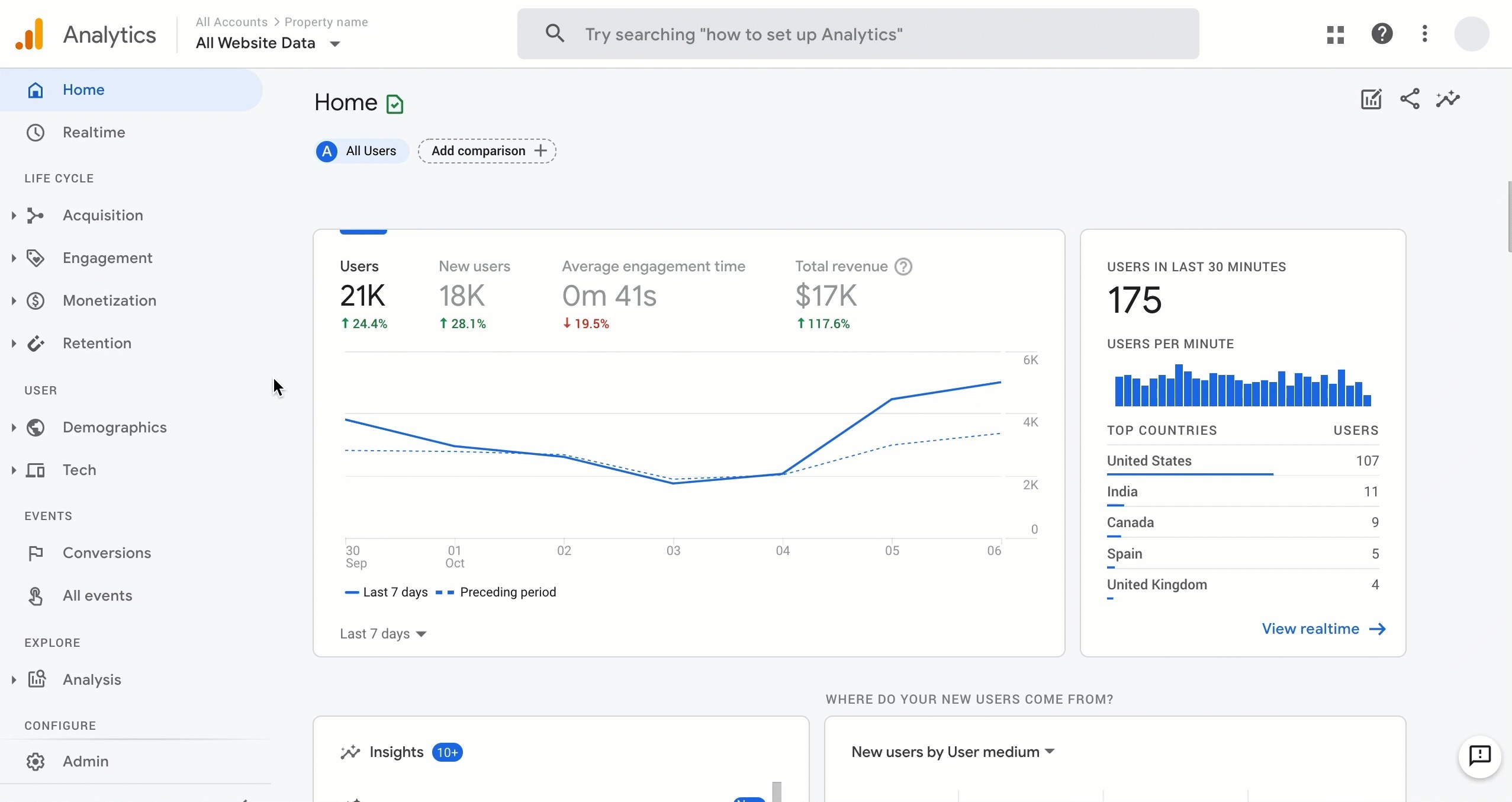 Much to the annoyance of its customers, digital marketers were forced to absorb Google’s own digital services taxes in the UK from 1st November 2020 via a 2% hike. Aimed at collecting revenue from digital companies with a UK revenue of £25 million, the tax had been in the works for some time – but came as a surprise to many that Tech Giants would pass the cost on to customers.

Following the announcement of this 2% tax, many of Mackerel Media’s own clients opted to absorb the tax into their monthly budgets – essentially reducing their overall media spend without increasing budgets.

Other large digital companies have also announced they will be passing on the Digital Services tax, including Amazon who will charge an additional 2% on referral fees, fulfillment by Amazon (FBA) fees, monthly FBA storage fees and multichannel fulfillment (MCF) fees.

There has been no word yet as to whether of not Facebook will follow suit, however as of 1st January 2021 they will be charging a 6% service tax on ads sold in Malaysia, suggesting the UK’s DST may be next on their list.

Finally, it should come as no surprise that paid search and social media spend grew faster than ever during 2020, with traditional media formats suffering thanks to the impact of COVID-19.

The report suggests that Paid Search channels will see an impressive 26% growth year on year from 2019, while social advertising closely follows with a 25% increase in the same period. While the report doesn’t mention specific companies, it would be safe to assume that Google and Facebook will have captured a lot of the increased digital ad growth.

The survey also looked into expected spend levels during 2021. Unfortunately, most businesses reported they expect only a 5% growth in their budgets over 2020, with almost 70% saying they didn’t have a clear indication of what their 2021 digital budgets look like yet.

Facebook Braces Itself for iOS 14 Changes
Scroll to top